In the past few years a series of paradigm-shifting discoveries have radically altered our understanding of mechanisms underlying integrated gene expression programmes, including the widespread transcription of non-coding RNAs. In particular, the discovery of the regulatory small RNAs represents a major breakthrough in recent biomedical history.

In our current research, we are investigating the molecular mechanisms responsible for orchestrating and integrating genome-wide transcriptional and post-transcriptional responses upon changes in extracellular cues critical for diverse biological processes, including developmental, physiological, and pathological events. We focus on previously unsuspected non-coding RNA-mediated strategies in regulating gene expression. These strategies, which underlie genome-wide transcriptional and post-transcriptional responses, are controlled by complex networks of protein/RNA interactions, ~50 percent of which are expected to be cell-type specific. Despite their discovery more than 35 years ago, the fundamental principles by which non-coding RNAs are regulated and functional have been poorly understood. Our recent findings have contributed to unravel novel and unexpected biological and biochemical aspects of such a central role of noncoding RNAs in regulated gene expression programmes. Our works also extended the knowledge of non-coding RNAs toward novel therapeutic and diagnostic implications for many common diseases, including atherosclerosis, diabetes, and cancer.

Presently, many questions about RNA biology in gene expression control are still to be fully addressed, including i) how do fate of RNAs ultimately influence their function? ii) what are the biochemical mechanisms underlying the function of noncoding (nc)RNAs? A major challenge for both questions will be to define the components of the ribonucleoprotein complexes that ultimately determine the fate and function of ncRNAs in timing and cell specific fashion. Overall, we foresee that in vivo experiments and OMICS approaches coupled with proteomic and transcriptomic methodologies will be the most exhaustive path to uncover the role of ncRNAs in physio-pathological events of gene expression. experimental methodologies and OMICS

We set up three main axes:

We recently demonstrated a direct role for let-7b/c to regulate KSRP expression, which in turn controls let-7 processing in competition with Lin28, and the turnover rate of the pituitary terminal differentiation marker aGSU leading to an upregulation of its expression. These findings defined a hierarchical mechanism by which during organogenesis the upregulation of specific miRNAs controls the expression of KSRP and the subsequence fine-tuning of the processing for selected miRNAs and decay rate of mRNAs encoding for differentiation markers. 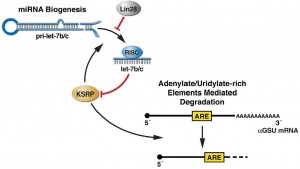 Currently, we are using proteomic and high-throughput sequencing approaches coupled with bioinformatics to study the protein/miRNA code to orchestrate the post- transcriptional programme(s) of regulated gene  expression.

Using deep sequencing, we demonstrated that the ~110 nucleotides (nt) long Ro-associated Y-RNAs (or RNYs), are processed into small ~30 nt sequences in apoptotic and lipid-laden macrophages. The expression of RNY–derived small RNAs (referred as s-RNYs) is significantly upregulated in serum of 263 patients with coronary artery disease compared to 514 controls. These findings were patented (n° WO2015055857 A1) and published in BMC Medicine in 2015. As follow up of this primary discovery, we have investigated the role of s-RNYs in macrophages. Loss and gain of function experiments show that s-RNYs activate both caspase-dependent cell death and NF-kappaB-dependent inflammation in macrophages. We found that s-RNYs activate Toll-like receptor 7 (TLR7).These data indicate that s-RNYs are intrinsic components of the machinery regulating lipid-laden macrophage phenotype and function as mediator of inflammation/apoptosis. We are currently investigating the protein complex associated to s-RNYs to study the direct and specific mechanism(s) of s-RNYs inflammation and cell death in macrophages. 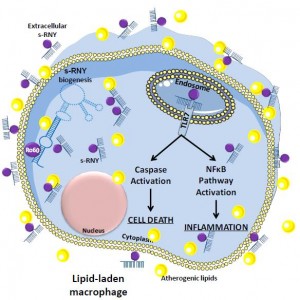 Recently, we and others extended the concept of « epigenetic inheritance » to RNA-mediated paternal heredity. We found that mice derived from embryos microinjected with HFD-sperm or -testis RNA, developed metabolic pathologies, such as obesity and diabetes. Interestingly, miR-19b alone was sufficient to mediate the paternal diet-induced heredity, as we demonstrated by microinjecting it into naive one-cell embryo (Figure).

To gain insight into the mechanism of epigenetic inheritance, we are now exploring the following specific aims: i) To identify the epigenetic signal accumulated in sperm upon continuous paternal HFD feeding for multiple generations. ii) To perform a parallel between mice and human, a deep-sequencing analysis of the RNA transcriptome of normal and obese men will be performed. 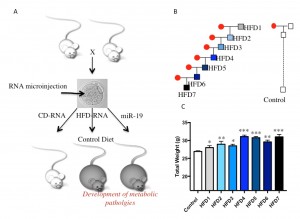 More detailed webpage of the team can be found here: 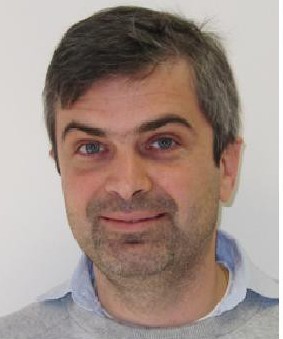